Should I take them out?

My husband went to the dentist the other day for a regular check up and came home asking about replacing his mercury fillings.  Almost every tooth in my mouth with a spot for a filling contains that dull silver color.  I began to wonder what really is the risk of my mouth full of mercury amalgam and should we both take them out.

Our dentist hands out a fact sheet about the different types of filings, which I suspect is a California law.  Mercury is on the California list of chemicals known to cause reproductive toxicity, and is particularly harmful to the developing brain of a child or fetus.  Yes the United States has not banned mercury as other countries such as Sweden and Norway have done, but we are often slow to react, such as is the case with BPA and many other environmental toxins.  The mercury filings in my mouth were created by mixing around 43-54% of elemental mercury with 46-57% of an alloy powder that is composed primarily of silver, tin and copper (Dental Board of California, 2004).

Some basics.  Mercury can exist in several forms, the type that is most harmful to humans are the organic compounds, which can be readily absorbed in the body and particularly damaging to the brain (Roberts, 2009).  The main way the organic type of mercury is transmitted, in the form of methylmercury, is via ingestion of fish.  This is why we always recommend to pregnant women to avoid certain types of fish during pregnancy [this is for another review].  The type of mercury used in dental fillings is the elemental type of mercury, while volatile, is less absorbed in humans.

In most experiments, inorganic mercury, which is less toxic than mercury vapor, was found more toxic than composite compounds, like the combination used to create the dental amalgam.  Less toxic does not mean non-toxic.  Multiple studies have shown that small amounts of mercury vapor are released with chewing or grinding teeth with mercury filings, on average 1-3 micrograms daily (Richardson, 2003).   As a reference, it has been estimated that a can of tuna contains 52.7 micrograms of methylmercury (Yess, 1993; PBS, 2005).  Other studies suggest, in addition to the chewing releasing mercury vapor, that the mercury from dental amalgam is transformed into organic mercury compounds by the microorganisms that exist in our saliva and gut (Heintze et al 1983; Leistevuo 2001).

In animal and human experiments the outcome reported is mercury levels in blood, hair and urine.  However, when there are low/normal mercury levels in blood, hair and urine; potentially high mercury levels may be found in critical tissues such as brain and kidney. Excretion does not necessarily correlate with absorption.  Meaning that potentially those who excrete the mercury more effectively are less likely to have accumulation in body organs.  Where some reports state that the body half-life of mercury is 20-90 days, others have found that mercury in the brain has a half-life greater than 17 years (Mutter 2011). 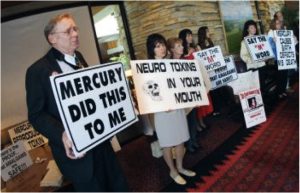 Protestors against FDA approval of continuing use of mercury amalgam

“Amalgam disease” as it’s reported is most frequently associated with complaints of: chronic fatigue, depression, headaches, concentration, memory and sleeping problems, joint and muscle pain, susceptibility to infections, and complaints of abnormal heart sensations and digestion disorders.  Many of these complaints are vague and common so it’s difficult to link directly to mercury fillings.  However, the removal of amalgam fillings have been reported to improve overall health and certain disease states such as Multiple Sclerosis and other autoimmune diseases (Mutter 2011).

A concern I had with removing my fillings was ingesting the released mercury particles.  There is a study that measured mercury levels of 12 patients following removal of fillings – as measured in blood and urine.  Initially there was an average increase of mercury levels by 32%.  Following was an exponential decline of mercury measures.  After 60 days, mercury levels declined to approximately 60% of pre-extraction levels.  In individuals who were followed long term, levels approached ranges comparable to patients without any mercury fillings (Sandborgh-Englund et al 1998).

As a side note, not only is dental amalgam potentially a concern for medical health but also impacts environmental health.  In the United States approximately 1000 tons exist in the mouths of the residents and is the 3rd most significant source of environmental mercury (Bender 2008) after coal burning power plants and mining of gold and mercury (EPA Website, 2012).

So, even knowing that mercury is a toxin, I’ve decided not to take mine out.  Since it is already there and I’m not experiencing any unexplained concerning symptoms, the risk of removing the fillings, sending the mercury back into the environment, and replacing with something else seems greater.  Additionally, it seems that removing the mercury fillings could lead to weakening of the teeth and potentially more problems.

For individuals experiencing any symptoms without any found medical explanation, removing their fillings may be a reasonable step in trying to identify a cause.  Because the literature is contradictory, it may benefit some individuals.  For myself, however, I am skeptical. It is in the financial interest of dentists to encourage removal of the mercury amalgam but I think risks of removal outweigh benefits I might experience.

However, would I allow a dentist to fill my son’s cavities with mercury amalgam?  I’d have to say “no”.  Because of the potential health risks, the known risks to exposure for those who work in dental offices, and the environmental impact from mercury I’m going to avoid it in the future.

As one author puts it, “for medical reasons, amalgam should be eliminated in dental care as soon as possible. This will confer gains in three respects: The prevalence of side-effects from patients’ mercury exposure will decline; occupational exposure to mercury can cease in dental care; and one of our largest sources of mercury in the environment can be eliminated” (Maths, 2002).

This past week I returned to my dentist for a check-up and fortunately, I didn’t need to address fillings. No cavities!  I even asked her about my mouth full of fillings and she said, “you don’t have many”.  It made me feel a little better about deciding NOT to remove my fillings.

Because of the effects beyond my mouth, I’ve also decided to look for a local dentist who doesn’t use mercury at all in his/her practice.

Anyone know of any?

Dental Board of California (2004).  “The Facts About Filings”, pamphlet.  California Department of Consumer Affairs.

Mutter J (2011).  Is dental amalgam safe for humans?  The opinion of the scientific committee of the European Commission.  Journal of Occupational Medicine and Toxicology, 6:2-17.