…to hormone replacement therapy and anti-depressants

Exploring our local health food store yesterday, Van’s, reminded me to complete and post this article I’ve been working on way too long.  It also reminded me how many “natural” products are out there that tout miracles for menopausal symptoms. 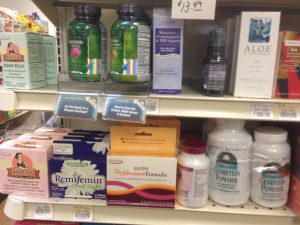 On daily basis women with menopausal symptoms often ask me if there are any “natural” remedies for their hot flashes and mood issues.  It seems lately that I’ve had more and more women asking this question.  The only thing that I have to offer them is hormone replacement therapy, some women just aren’t the best candidates for this method, and anti-depressants have their own list of unpleasant side effects.

Especially for women who are just starting the menopausal transition or having milder symptoms, natural and/or herbal remedies may be an ideal option but I wasn’t familiar enough to recommend anything in particular.  In an attempt to come up with some alternatives, I headed to the literature.

The least invasive and least risky are the behavioral therapies.  Few studies have looked at these methods of managing symptoms but a couple studies show promise with a particular kind of breathing, paced respiration.  This method of slow, deep breathing has been compared with progressive muscle relaxation, doing other relaxing leisure activities, and biofeedback.  In all cases, the paced respiration group demonstrated decreases in hot flashes (Kronenberg et al, 2002).  This is an easy practice that women can incorporate into daily life to help cope and reduce the hot flashes experienced in menopause, especially if mild severity.

While I am very much a believer in acupuncture for many things, its efficacy in menopause symptoms is still in question.  There is one study that looked at acupuncture and one issue with the study is that the treatment and control groups may’ve been too much alike; one received standard acupuncture and the other a shallow acupuncture treatment, but at the same points.  From pre-treatment to post-treatment, both groups showed a significant decrease in hot flashes but between the two there was not a difference (Kronenberg et al, 2002).  Since both groups showed an improvement following treatment, this actually suggests that acupuncture or pressure may work to help alleviate the symptoms.

As mentioned previously, the only tools I have available are hormone replacement and anti-depressants, which have their issues.  I was hoping a review of the literature would reveal more herbal options to offer but sadly it is still limited.  While many things have been touted as working: black cohosh, dong quai, evening primrose, ginseng, red clover, vitamin E, chasteberry, soy, wild yam, and progesterone creams, there are limited remedies with proven evidence that they are beneficial.

It seems that only one really has any evidence, that being black cohosh, and another soy, has promising but mixed results.  The others seem to have no clinical benefit, at least based on current literature. (Kronenberg et al, 2002; Low Dog, 2005) and while women using progesterone cream seemed to note “improvement”, it came with a risk of postmenopausal bleeding and subsequent endometrial biopsies (Leonetti et al., 1999).  This finding suggests any estrogen or progesterone-containing product over the counter may influence the uterine lining.  In women who still have a uterus, when physicians prescribe these medications, both are given in an amount to attempt and reduce the risk of uterine lining stimulation that can result in development of endometrial cancer.  Therefore, I tend to caution my patients who are using over the counter products to avoid those that are basically hormones and carry those same risks.

Black cohosh, in the form of Remifemin, is relatively well studied and has the most support for its use.  A review article found 5 controlled studies and all found that black cohosh reduced psychological symptoms, improved vaginal epithelium, and decreased measures of menopausal symptoms, particularly hot flashes and sweating (Low Dog, 2005).  It does seem to be helpful for a multitude of symptoms but a concern I have is that no studies exist on long-term use regarding hormonal stimulation on breast or uterus, so women with a history of breast cancer or at risk for endometrial cancer I would advise use with caution.

Ironically, while working on reviewing the literature for this post our pharmacy department came out with a memo that addressed soy as a recommended “pharmaceutical” for reducing mild menopausal symptoms.  The studies I found suggest only modest benefits, mostly for hot flashes, and the benefits by 6 weeks decreased.  Interestingly, there was a 50-60% reduction in symptoms in both the soy and placebo groups in the studies.  Foods containing soy certainly seem a safe addition and may help with mild symptoms so supplementing your diet with beans is a benign way to start.  However, it is difficult to make a statement about high-dose isoflavones, with the most common doses being between 50-150mg daily and in women with a history of breast cancer it’s best avoided (Umland, 2008).  Like most things, the lowest dose possible to help with the symptoms should be the guiding principle.

While less than I had hoped to offer patients with menopausal symptoms, at least this provides a few options to suggest to my patients with some confidence thanks to support from the research.

Kronenberg F and Fugh-Berman A. Complementary and alternative medicine for menopausal symptoms: A review of randomized controlled trials.  Annals of Int Med. 2002;137:10:805-813.