Fluoride for a 3-year old?

Due to indecisiveness, we have both a fluoride and non-fluoride toothpaste. 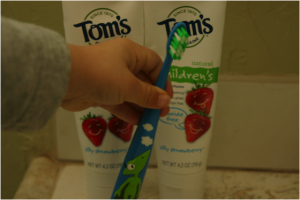 My son reaching for his toothbrush as we get ready to brush our teeth.

As San Jose begins to add fluoride to the drinking water my husband and I have been wavering about whether or not to provide fluoride to our son.  In fact, he has both a tube of fluoride and non-fluoride toothpaste and from day to day I alternate.  My husband seemed to think that someone was profiting at the expense of children receiving fluoride and wasn’t convinced it was safe, and in all honesty, I wasn’t certain.

In the United States, more than two-thirds of households served by public water systems are fluoridated (ADA, 2005).  Livermore, where we live, happens to be in the minority, there is no fluoride added to our water (California Department of Public Health Website, 2012).  Because of this, our pediatrician mentioned that our son should be taking fluoride supplements.  A prescription sits in the pharmacy until I come to a conclusion on fluoride use and convince my husband fluoride supplementation is not the result of some greater conspiracy that may hurt his son.  So, I decided to start with a little history lesion.

How was it that fluoride was even discovered as a way to reduce cavities?

In 1920’s Colorado Springs a dentist named Dr. Frederick McKay noted that many residents had dark stains on their teeth and began documenting reports of this “mottled enamel”, discoloration of the teeth that ranges from bright white spots to brownish-dark discoloration, which today is called fluorosis.  What ultimately was most remarkable about these individuals was that their teeth didn’t rot although fluorosis also is of cosmetic concern.

After many studies it was discovered that these individuals had naturally occurring elevated levels of fluoride in their water supplies, around 13.7 parts per million or milligrams per liter of water (ppm or mg/L).  As a side note, the optimal amount of fluoridation in the water has been determined to be 0.7-1.2ppm (California Department of Public Health, 2012) so their levels were 11 to nearly 20 times more than what is now thought of as an “ideal” amount.

Fast-forward 25 years and numerous studies of those initial cities receiving fluoridation in their water (Grand Rapids, Michigan; Newburgh, New York; Brantford, Ontario, and Evanston, Illinois) and it was found that overall fluoride helps to reduce rates of cavities.

However, this didn’t directly apply to young children, their temporary teeth, and didn’t address if any harm to their developing brains. Before giving it to my son I wanted to know more.  Basically, I needed to decide for myself if fluoride prevents cavities in temporary teeth and if there are any harms?

Is there a risk of fluoride use in young children?

Since it is known that in animal models damage can occur to the brain and in adults, acute fluoride poisoning can occur, it is reasonable to assume that children would also be at risk.

One review in 2012 looked at 27 epidemiologic studies that evaluated IQ scores and cognitive function measures and compared those in high fluoride areas and low areas.  Inevitably, most of these studies take place in China because fluoride is found in nature.

The more accurate randomized controlled trials in areas without fluoride in the water noted that increasing levels of fluoride in toothpaste was associated with an increased risk of fluorosis (comparing low 440-550ppm with high levels 1000-1450ppm).  When looking at age separately, a reduction in fluorosis was found if brushing with fluoride began after a year, with inconsistent findings prior to 24 months.

Does fluoride make a difference in cavity rates for children?

One of the most recent Cochrane reviews from 2010 included 75 studies but only six of these studies looked at fluoride concentrations on early teeth and ultimately found no difference.  Meaning that the studies were too conflicting to recommend that prior to permanent teeth that fluoride makes a difference (Walsh et al 2010).

Another review in 2008 looked specifically at the benefit of fluoride in children under 6-years, when permanent teeth start to develop, and only one of those studies looked at 6-month to 3-year olds (Ismail, 2008). They reviewed an area of China with less than 0.3ppm fluoride in the water.  Only a small percentage of children in this region participated (<17%) for the 180-day supplementation, with high withdrawal rates (Hu et al, 1998).  After 3 years, those who used fluoride daily had a 47.2% lower rate of decayed, missing, and filled primary teeth compared with those in the control group, but this is a small sample, it’s only looking at primary teeth that eventually are lost, and there may be other reasons for these differences.  It said nothing about any health concerns from over-ingestion.

In a study looking at supplementation in expectant mothers and then supplementing those children for 3 years, there was no benefit in preventing cavities (Leverett et al, 1997). In other studies supplementation did not translate to less cavities in children’s permanent teeth when used up to age 5 (Mann et al, 1989).

In older children, there seems to be a benefit with fluoride in terms of reducing cavities, however, the authors also note that there is increasing benefits and risks when >1000ppm fluoride is used (Wong et al).  However, a discussion on permanent teeth is for another day.

What did we decide about starting fluoride in our son?

The results of the studies in young children on their temporary teeth and potential risks are too conflicting for me to decide to administer fluoride to my son.  For now, we’re not picking up the fluoride supplements.  As he gets older, around age 5 or 6 and he starts getting his permanent teeth, we’ll starting using fluoride.  That is, once he’s not simply licking it off his toothbrush!

I’ve decided that in children younger than 24 months, I definitely would not give fluoride.  For my son, age 3, I tend to think that a healthy diet, good teeth hygiene, and brushing habits along with taking him for check-ups (which, admittedly, we need to do!) can make up for taking in excess fluoride without any potential additional risk.

Anyone know a good kid’s dentist in the Tri-Valley area?

Time to brush our teeth! We’ll use the one without the fluoride.

**To see if your water is fluoridated:

–>  In California you can go to http://www.cdph.ca.gov/certlic/drinkingwater/pages/fluoridation.aspx