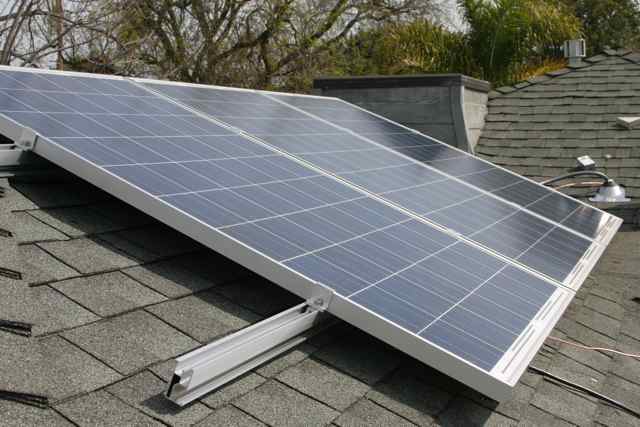 Solar panels being installed on our roof, March 2012

Trying to make the commitment to greening our life, meant thinking of ways we could reduce our carbon footprint.  One of those ways we thought to reduce our use and may be a worthwhile investment was to add solar panels to our house and our back rental unit.  We hope it will ultimately pay for itself or at least cover our power bill.  It has been quite a journey!

We decided to make the commitment and got quotes on cost.  Before the installation even began we had to decide on the panels and their locations, requiring an architect to design the plans.

Project started with installation of the braces where our solar panels would be mounted.  They worked on the installation during the day while I was away at work so I hardly noticed the interruption.

The braces were on but we had to wait for our ConEnergy solar panels to arrive from Germany.  After finally arriving they were installed on our back house and the majority of the front house.

A few more days of waiting for a flat mount rack and the front house solar panels were finally completely installed. The installation was only the beginning. Once installed, the paperwork was submitted to the city for approval.  To actually get them turned on required the city to approve the installation and PG&E to come and connect it to the grid.  This was no small task.

Walking into our kitchen that morning, the floor was covered with water.  Unfortunately, or maybe it was fortunate it happened when it did.  The following week after our panels were installed, it rained.  One of the braces had been drilled through the roof into our back bathroom and flooded the kitchen.  Since it rained the entire week our repair had to be put on hold and the bathroom was covered with a tarp.  As soon as the rain stopped, the company that put on our solar came and patched our roof.

Took a bit for things to dry out after the massive amount of rain we had but finally bathroom drywall was replaced.  The solar company got another company out to do the work.  Although, that company took a couple of attempts to get it done.  It was waylaid the first attempt due to an “emergency” by one of the roofers on the first day they were supposed to come.   Apparently, such an emergency they forgot to tell their employer.  They finally came on April 20th to do the drywall.  Don’t know the exact date but it took awhile longer for my husband to finally repaint the bathroom where the drywall was patched.

Once our solar was actually installed, we still had to wait for the city to approve it.  While the company that installed our solar followed up with the city on at least an every couple day basis, it took a couple weeks before the approval was granted.  It finally was approved on April 23, 2012.  Now, the city was done but it was PG&E’s turn.

Letter received from PG&E stating that our system was now in the interconnect system and being reviewed.

PG&E engineering passed our system. We just had to wait for PG&E to come out and connect our system to the power grid.  Again, this required follow-up calls from my husband and the company who did our installation for it finally to happen.

PG&E came and left a note that they couldn’t get in our gate.  What?!  We have a gate but it had been left unlatched for them to come in.  There’s a string that hangs down outside to lift the latch, a common way that fences open so it shouldn’t have been hard to operate.  The note they left on the gate said they couldn’t obtain access.  My husband called and they said they’d put us back on the list to come by at a future date.

Took close to 4 months from installation to working, but…

You can see how much our solar is producing at:

If you live in the San Francisco Bay Area and need a solar installation I can highly recommend Nor Cal Solar Services. From quote to finish their service, professionalism and honesty was unmatched.